Find out what patients and visitors told us about the Royal Liverpool Hospital when we visited in October 2019. 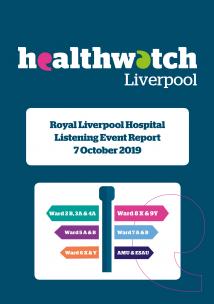 On 7 October 2019 we visited the Royal Liverpool Hospital and spoke to patients and their families about the care that they receive there.

The Royal Liverpool Hospital received a great deal of positive feedback from both patients and visitors at our Listening Event this year. 88% of the people we spoke to rated the hospital either 4 or 5 out of 5. There were a large number of positive comments about the staff and the quality of care provided.

We received more variable feedback about the state of the building and equipment and feelings about the food were mixed. A number of people expressed that staff appeared to be too busy and this impacted on their ability to deliver patient care.

On the day, we received three pieces of feedback which we raised immediately with appropriate hospital staff. These were:

a) A patient who felt they had been treated less fairly than other patients because of their ethnicity.

b) A patient who felt that their mental health support needs had not been taken seriously because hospital staff were entirely focused on their physical health.

c) A relative who was concerned about the quality of care being provided.

All of these comments were followed-up on the day by the hospital’s Patient Experience Lead.

We have provided the hospital with an anonymised version of all the feedback that we captured during our visit. The hospital can use this feedback in conjunction with the other ways in which they capture patient experiences to see what is working well and any areas for improvement.

We look forward to continuing our work with The Royal Liverpool Hospital over the next year and we will carry out a further Listening Event in 2020.

We've made it even easier for you to share your expert knowledge as a patient, service user, carer or service provider and help shape local health and social care services. 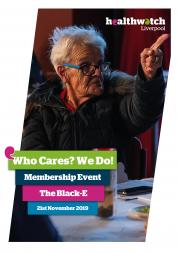